david5605 wrote:I also wouldn't machine the original jaws 'flat'. I'd machine them with a raised keyway (or whatever its called) right angle to the jaw length to take the thrust of the upper jaws and take the stress off of the cap screws that hold the two pieces together.

With mine I only machined the top step off. That way if desired you could machine the keyway or (slot) in the back of the soft jaw. This way it doesn't render the chuck useless to being used without the soft jaws as you still have one step left in the jaws assuming you use the outside jaws as I did. As for the keyway I have found it to be un-necassary, at least for machining aluminum as I do. Might be different for steel parts.
Vision is not seeing things as they are, but as they will be.
Top

Mr Ron wrote:After reading the treatise on making soft jaws, I am of the impression that once you bore the jaws for a certain diameter, the next time you bore, you have to go to a bore larger than the previous one. You can't go back.

Size makes no difference, assuming you use the spider properly. It is also not necessary for jaws to make 100% contact with the part. When going from one diameter to another, so long as you get decent surface (say 50%) contact of the jaw with the part, they will serve perfectly well, and won't damage the object being held.


The spyder doesn't have to contact all 3 jaws exactly the same, but if it doesn't, you will be removing unequal amounts from each jaw.

Not true. Because the chuck is a universal chuck, the size of the object being inserted to set the jaws is not seen as being unequal so far as the jaw diameter setting is concerned. It will still form a true circle at some diameter. The reason you should be concerned that the three legs of the spider are similar is to prevent side loading of the jaws. The slight difference in lengths has the potential to cock one or more of the jaws sideward, which will result in minor runout of the jaws when you grip the intended object. That, of course, depends a great deal on how tight the jaws are in the slides. It may or may not manifest itself as a problem, but it's a great place to look for the cause of jaws that don't run true.


Once a chuck has been fitted with soft jaws, you can't use the chuck in it's original configuration without switching back to the hard outer jaws (2- piece jaws). One piece jaws that have been modified for soft jaws can't be used ever again in it's original configuration. This chuck is now dedicated to be used with soft jaws for the rest of it's life.
The above is my understanding of how it all works; am I correct?

That's basically correct, but chucks that come with soft jaws often come with three sets of jaws, although that's not important if you have a single set that are two-piece.

One of the realities of having soft jaws is that once you've used them, you will rarely go back to the hard jaws. You can keep a set of jaws mounted that are through bored, that will accept a large range of material sizes. The chuck most likely won't run all sizes dead true, but that's a function of the error of the scroll, not the jaws. Hard jaws present the same problem, but you can't easily correct the error. You should expect a range variation in true running that varies within about .002" if the scroll is tight and well centered in manufacturing. That's generally better than you'd get from a well used chuck, plus you can correct for the slides being sprung, a common problem with older chucks.

Do provide for some method of keying the jaws should you venture forth with the soft jaw idea by converting hard jaws. They should key both to the side and against chucking forces so they locate properly when installed. To allow the screws to hold the load of chucking is NOT a good idea. Chucking force often varies, so you run the risk of a jaw moving when tightening the chuck, eliminating the precision you hoped to achieve.

John Evans wrote:Sorry you are out of luck being you have one piece jaws. 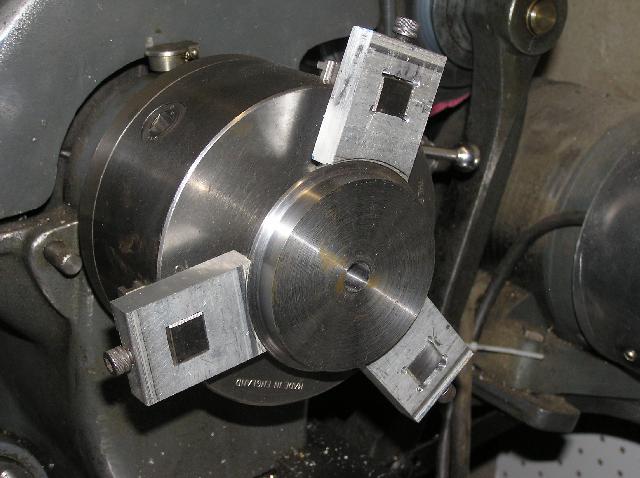 If you want soft jaws, a cheap way is to get a chuck that uses 2-peice jaws but is missing the jaw tops. I got this chuck for $60 and made my own tops. Also picked up a pile of steel soft jaws on closeout for $6 each. 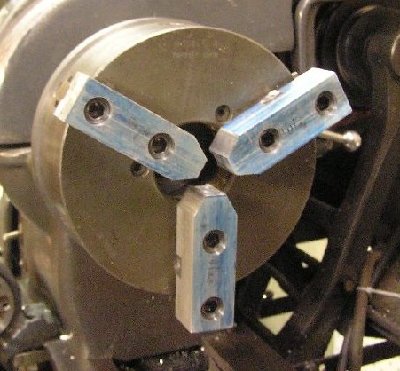 Harold V.... Assuming a universal chuck is out .002" TIR, If I were to put a dial indicator on the work and find the high/low spots, could I just place a .002" shim or one of suitable thickness between the low jaw and work piece? Just out of curiosity.
Mr.Ron from South Mississippi
Top

Mr Ron wrote:Harold V.... Assuming a universal chuck is out .002" TIR, If I were to put a dial indicator on the work and find the high/low spots, could I just place a .002" shim or one of suitable thickness between the low jaw and work piece? Just out of curiosity.

It doesn't work that way. Because you're working with a universal chuck, the chuck sees the addition as an increase in diameter of .002", but it may or may not be where it's needed. It may fall between jaws (and usually does). Your suggestion may or may not work, and it can get frustrating trying to hit it dead on.

Frankly, if you have a three jaw that runs within .002", consider yourself fortunate. That's a very good level of precision. If you desire better conditions, that's where soft jaws shine.

I used these "button" jaws with good success.
As Harold mentioned, depending on just the bolt or screw is not
the best solution, but sometimes you gotta go with what ya got.

Note that the screws for these softjaws are countersunk flatheads
not just counterbored for normal socket head screws, also grooved
to fit the long key on the chuck to hold the jaw from twisting.

Each softjaw was tightened down with a torque wrench for consistancy,
and care was taken to tighten the jaws on the gear no more than
was needed to securely hold it during machining.

Nice thing on Ike's setup is, not only is the part concentric, but because he machined the jaws to a set depth and not all the way back, the part will be held at a consistent depth. Great when you need to face off a bunch of parts to the same thickness.

I then rebored the jaws to accept a 60 tooth gear for the same op.
I just took a little skim cut to clean up the back of the recess after boring
for the 60 tooth gear.

And I can rotate the soft jaws 180 degrees and use the other end when I have
the need.

I've heard tell of guys cutting two grooves on the button jaws perpendicular to each other,
so that they have 4 useable faces rather than just the 2 they get from the single groove.
Top

I love those button jaws. There is no shortage of new ideas for the inexperienced on this forum.

OK, I have to admit it!
I didn't think those soft jaws up.
A machinist friend/mentor showed a set to me first,
and told me the how to's and where for's.

edit: and I think he learned it from his mentor,
But the flathead screws are my own take on his
directions.

Now that is a neat idea Ike ,thanks for posting that . I think I will whip up a set of those with 2 grooves. And add a refinement by stamping the faces 1-4 for quick orientation on reinstalling.
www.chaski.com
Top

I stamped mine 1-3,
why do 4? using them on a 4 jaw kind of negates the purpose doesn't it?
edit: with a four jaw you lose the repeatability unless it's a scroll chuck.
Top
Post Reply
28 posts