I'm most of the way through making a ball turning attachment for my lathe. It has a small dovetailed slide, and the space available for the leadscrew meant it would be limited to about 1/4" in diameter. 1/4-20 threads seemed too coarse, and 1/4-28 doesn't go evenly into 1000... so I decided to make the leadscrew with 1/4-25 threads, and make my own tap to thread the matching nut. I've always wanted an excuse to make my own tap, and here it was. You can actually get 1/4-25 taps from a couple of specialty places, apparently it was used on some older firearms.

I started with a length of O1 steel, center drilled one end and turned a male 60 degree center on the other end. I turned the business end to it's final diameter between centers: 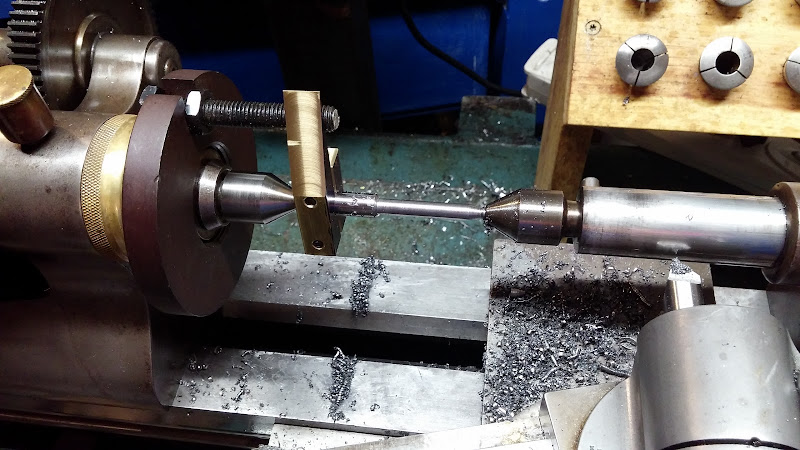 I then transferred it to my watchmakers lathe to mill the flutes using the milling attachment. The abused old chuck I've been using on my large dividing head for the mill is pretty much unusable these days. This was the next best thing, and it really didn't take long. The headstock of the lathe conveniently indexes, so getting the flutes perfectly spaced was no problem. 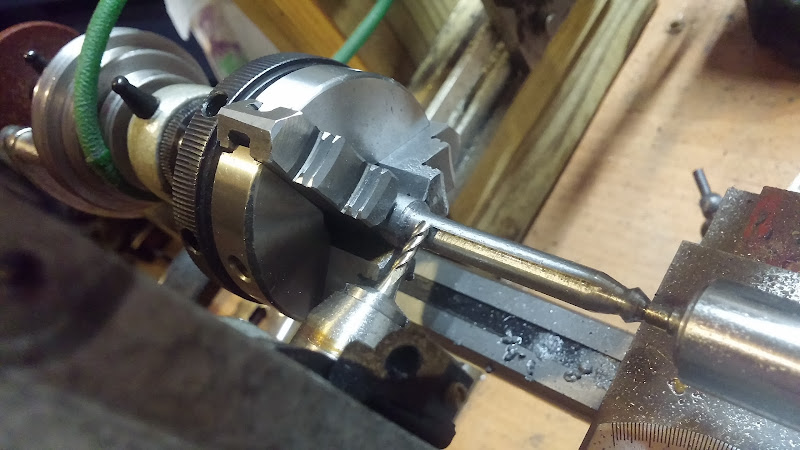 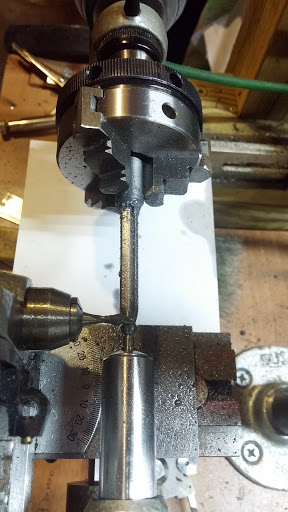 I returned the work to the bench lathe, blued it up, and cut the threads: 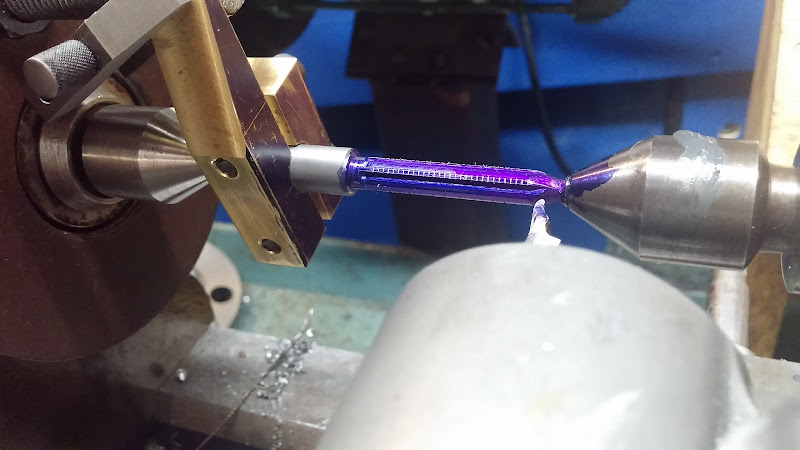 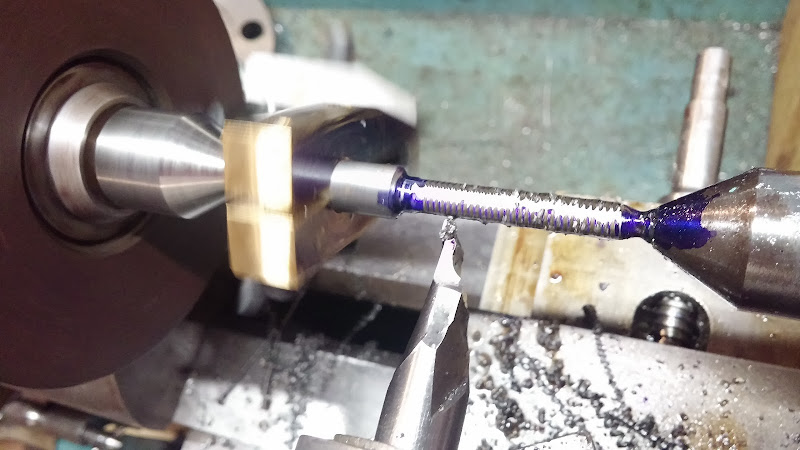 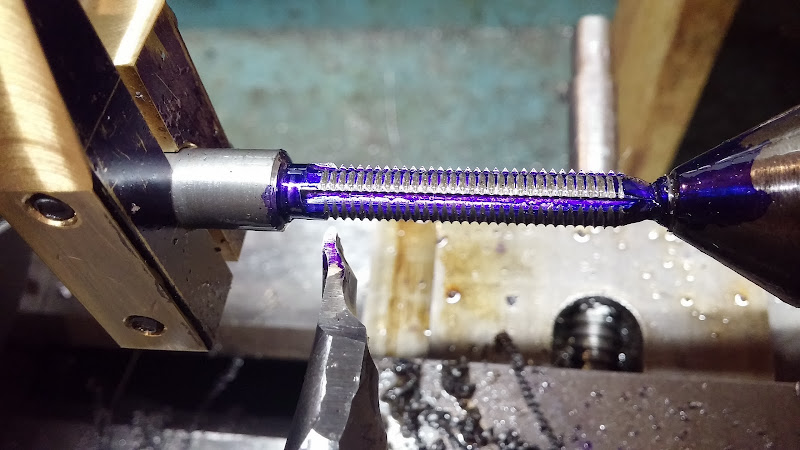 After the threads were cut, the shank was turned down to the final diameter (the flats at the end had already been milled at this point), and finally the very end of the tap given its final point, removing the male center I had turned to work between centers. It was then polished and lightly deburred. For polishing threads, I usually put some abrasive paste on a slip of wood and let it run along/in between the threads as the work is spun... the wood quickly conforms to the thread profile. In this case, I did the same but with the work spinning in reverse so that the cutting edges didn't immediately ruin the polishing stick.

Here is how it looked before heat treatment: 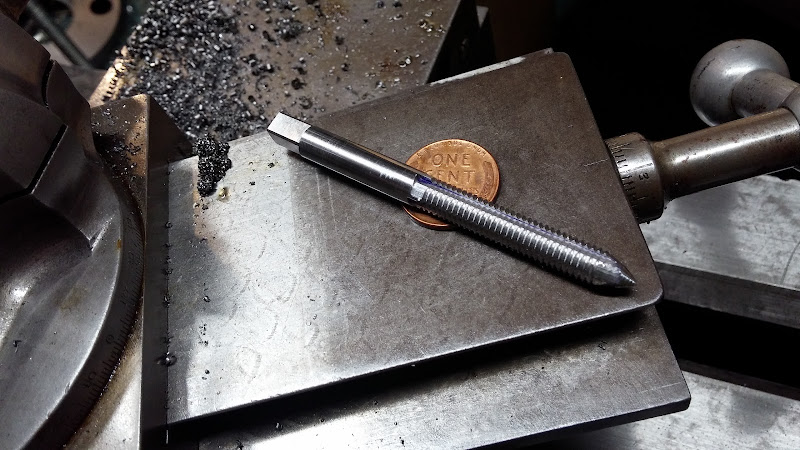 Being O1, heat treatment was straightforward. Lately I've been using a paste of boric acid (roach powder) and alcohol packed onto my parts while hardening. Especially when hardening in oil, it makes that nasty black scale chip of very easily. It leaves an attractive bright gray finish that polishes up quickly. After hardening (and testing with a file to make sure it was glass hard), I polished the shank and decided to try it out in a piece of aluminum before tempering it. It requires frequent chip clearing, as there's very little room for chips in the shallow flutes I milled, but it cut through just fine. Here is a pic of the heat treated tap, and another of the leadscrew threaded into the test hole: 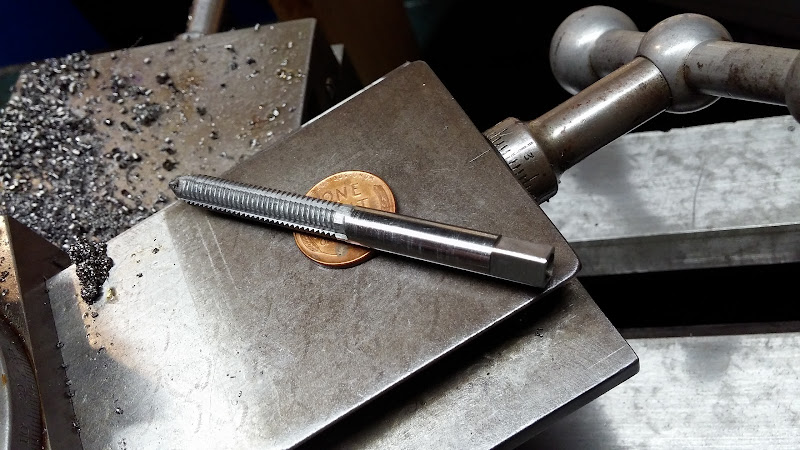 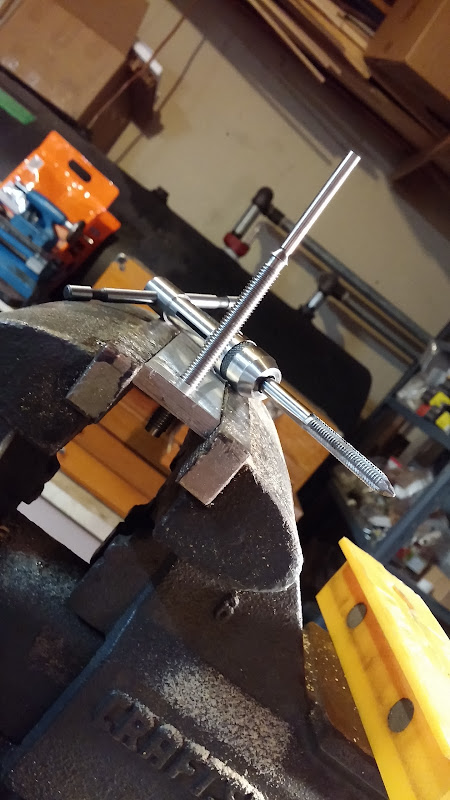 How did you cut the relieve, assuming you did?
Mauro Gaetano
in Austin TX
Top

tornitore45 wrote:How did you cut the relieve, assuming you did?

It's shown in one of the pics there (although I didn't specifically mention it, if you look close you can probably see it), the cutting of the flutes also included milling back a relief angle behind the cutting edges. The second milling pic, if you look close, you may be able to see the multiple angles having been cut. IIRC, the angle was 6 degrees (one position on the 60 hole indexable headstock). I left maybe between 0.005" and 0.010" of full cutting edge prior to the relief, for future sharpening if necessary.

The best illustration of the relief can be seen in the pic showing the completed threads with the layout bluing still in place. A few thousandths beyond where the blued sections come to a point are the cutting edges, and the blue tapers themselves show the relief.
http://joyofprecision.tumblr.com/
Top

thanks for sharing your project with the group

Very nicely done! I made a custom 1/4-40 tap for a friend once. Not as nice as yours, but it did work. I even single pointed a screw to test the tap. It was for a diesel model airplane engine he was making. He lacked change gears to make it himself.

One must remember.
The best learning experiences come
from working with the older Masters.
Ken.
Top

Thank you for the response. That is the way I relieve cutters, using blue to get close to the edge.
Mauro Gaetano
in Austin TX
Top

That's neat. But don't taps have to be tapered?
Every hard-fried egg began life sunny-side up.
Top

SteveHGraham wrote:That's neat. But don't taps have to be tapered?

Depends. For very fine pitched threads, there is so little material removed that a small chamfer at the end should prove adequate. As the pitch decreases in count, yeah, a taper goes a long ways towards easing cutting pressure. You can see the difference if you try tapping a hole with a bottoming tap, as opposed to a starter, or plug tap.

That is some great work!!
ATCST@Verizon.net
Top
Post Reply
16 posts