Bought a brand new lathe last year. The budget would have stretched to DROs. I chose not to get them.

The decision against the longitudinal axis was easy enough; I seldom machine anything length-critical in that dimension, and the magnetic base with the dial indicator do fine for that. Also, I figured the scale and its cable would become a chip collector that would be hard to clean.

I agonized over the cross slide DRO for a while, but between the chuck on one side and the tailstock on the other, plus blocking access to the gib screws, I eventually decided against it.

Downside: as I get older, it's getting harder to read the dial indicators and dial markings. Some time in the future I may decide that a couple of swarf-collecting attachments, one of which would probably get damaged regularly, would be a cheap price for large, easily-viewed LED digits.

If you go DRO, consider where you are going to put the display. I've seen a *lot* of lathe DRO displays mounted behind the headstock, or way over by the tailstock. You might think about repurposing as LCD TV swingarm and pulling it down behind the cross slide so you can see it and the workpiece at the same time. Maybe a piece of Lexan or Plexiglass to help protect it from hot swarf if needed. I never understood this business of having to turn your head 90 degrees from the action to see the display...
Top

All this talk about using or not using a DRO and keeping things simple is a noble idea and all but for me, with the amount I need to get done I just don't have the time to count dials...at one time I did though, and I was at the shop yesterday where I started it all. These are the machines I used, now mothballed. 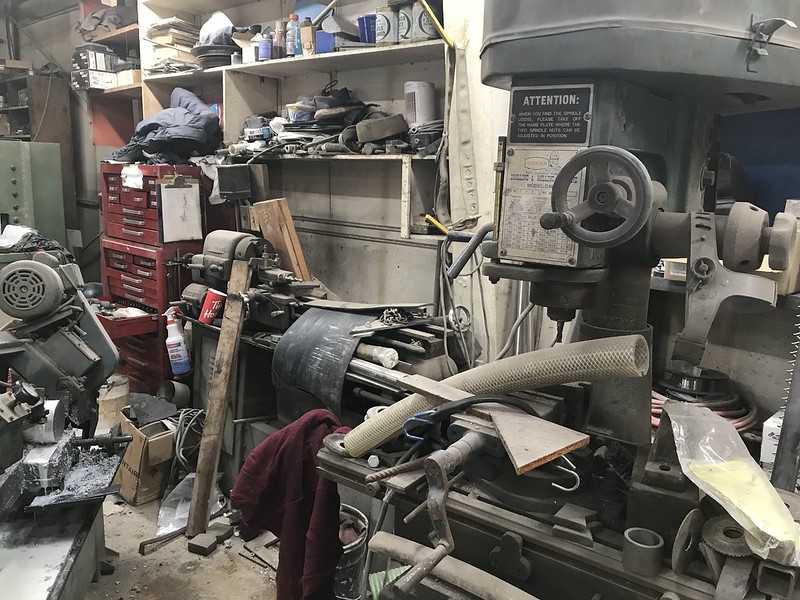 Vision is not seeing things as they are, but as they will be.
Top

Harold_V wrote: ↑
Sat Dec 14, 2019 2:59 am
The harsh reality is that not everyone has need (nor desire) to master machining. For some folks, their machine tools are nothing more than a means to an end---they want to build a widget, and machine tools are required. They have no aspirations of becoming a machinist, and have little interest in gaining the skills required to be one. For them, a DRO can be an invaluable tool

Say what you will, the fact is, for those without experience, a DRO can help those with little desire to dedicate enough time to developing the required skills to perform difficult work. If for no other reason, a DRO displays actual movement, not the amount a dial has been turned (backlash issues). Unfortunately, it does not teach the valuable lesson of tool loading, which proper backlash consideration does. But then, maybe it does, when the cut taken causes the tool to move away from the cut. That doesn't happen when addressing backlash properly.

To be clear, I have little interest in milling with a file (speaking of 19th century technology). I am not the least bit concerned with the fact that there was a time when that was required. However, I am adamant about my position of learning the basics for proper machine tool operations, and not learning to use dials is very much a part of not having the basics. What does one do when there is no DRO? Isn't it much like the lad who operates CNC's, and is then thrust upon a manual machine, one he has never operated?

The man (or woman) who is proficient in using dials can easily use a DRO. The same may not be true in reverse. I maintain that anyone who has a keen desire to learn machining should start with dials. I can see no down side, but I can certainly see a downside of being reliant on a DRO (I can also recognize the benefits).

Always good to know your history, the screw cutting lathe originated in the 18th century

Here is a site for the "Rolls" of DRO's, they have lots of good information.

They also own ACU-RITE.

I have an ACU-RITE DRO that came with my lathe, and a Heidenhain I installed on my rebuild of the B&S #2 Mill.

Here is their current device for lathes, etc.:

I'm not a machinist, but we've had a Bridgeport since 1968, and I have done a lot of dial twiddling on that and other tools. A DRO would have been a great addition if available in those years.
Top

I'm happy with the one I made like this out of PVC:

Any cheapo digital caliper will do
Top

To add a bit to Harold’s point of learning and what actually constitutes “getting it” for machining ie the feel for each machine, each machines differences in spring etc. I had an opportunity about 13 years ago to teach machining when two granddaughters aged 8 and 10 came into the shop and told me they wanted to learn how to use my machines and make things. One of the initial instruction was showing them calipers and mic’s. I showed them a dial caliper and a digital one, same for the mics. Once they got the hang of it I asked which would they like to use – you guessed it the digital. I told them no they were going to learn to use the mechanical ones. Same thing occurred on the milling machine and lathe. I had DRO’s on them. The DRO’s were turned off. How else could they ever had got the concept of backlash etc. Well to my satisfaction they became excellent machinists, building several models (they are now 21 and 23). When they started on their third model project the DRO’s went on (they were 15 and 17). They then used them as a tool like any other. They got close faster, then they did not trust the DRO for finish work on the Lathe. Once within 20 thousands out came the mic or gage pins if boring. On the mill setup positioning went much faster, but I still saw them counting turns, even though looking at the DRO. The younger one was displaying her models at a show and one fellow was really quizzing her about how she made some of the parts she had on the table for her next model. She told him about spending 8 hours on a part and screwing it up at the end, told him she decided to remake it rather than cobble it. He was impressed, told her he owned a large machine shop and offered her a job when she finished high school!

All in all I think DRO’s are a great addition to your tool kit, just realize their limitations. I had been building models for over 20 years before I got a machine that had a DRO ( a used Bridgeport with a 1975 era 2 Axis Heidenhain nixi tube DRO that I still use, it will not die). Unless you have one expensive DRO on the crosslide of your lathe you are not going to just dial in a .0005 cut, that is still going to require you to understand your machine and its “feel” when turning the dial.