Go to youtube, and type in. Virtual railfan...click on the video for deshler, ohio......this small yellowish building to the right,...is this an old interlocking tower?
Top

Yes. If you read further down in "About This Feed" it will tell you about it and the passenger station across from it.
Top

By the way, back in the 60s Model Railroader had an article about building an interlocking frame for use on HO or O scale railroads. I'd sure love to see that in live steam. I think there are some out there.
Greg Lewis, Prop.
Eyeball Engineering — Home of the dull toolbit.
Our motto: "That looks about right."
Celebrating 30 years of turning perfectly good metal into bits of useless scrap.
Top

There is a fabulous interchange plant on Pat McCarthy track in Kansas City, Big Creek and Southern. It worth the drive to make the meet just to see all those lights, switches, and the plant at night.

CSME is working to add and interlock tower to control the flow of traffic leaving Eaglpoint Yard, the new double main and the junction of the mountain division. Your truly working on the signals and plant and some of the double track.

If you are interested in this kinda stuff I recommend getting a copy of "Junctions" by Kalmback. It has some great track specifics based on the prototype and how interlock plants work.

John, think this is what you're referring to from Pat McCarthy's Big Creek and Southern RR...wasn't easy to squeeze into that tower to get a decent photo of the CTC panel.

Just goes to show, there's something in this hobby for everyone. The guy "manning the tower"...signalling was his big thing. He just had to be careful he didn't hold up engineers on the track while he cleared routes or did some troubleshooting. Carl B.
Life is like a sewer...what you get out of it depends on what you put into it!
I don't walk on water...I just learned where some of the stepping stones are!
I love mankind...it's some of the people I can't stand!
Top

When I was a young teenager my buddy and I knew the second trick operator at Burbank Junction, where the SP coast and San Joaquin lines diverged. Instead of going out with girls, we'd spend our Friday nights there where the operator was too glad to let us pull the five-foot-long levers of the 19th century interlocking frame. It was a relatively quiet spot with perhaps two or three trains per hour. The crossovers were a bit of a tug and you had to either put both your feet up on the adjacent levers and grunt, or bounce the levers to get them over.

One night we thought it might be fun to play a joke on him and sneak up to the tower and short out the rails with a piece of wire, and set off the annunciator for the block right in front of the tower. For some reason we didn't do that, which was fortunate because, unknown to us, a train had just come onto the approach from Taylor. If we'd pulled that bone-head stunt, the train would have had its green signal go red and he would have had to go to emergency. And our friend would have had to unlock the system with a set of built-in 15-minute delay timers. And, of course, there would have been a trainmaster down there wanting to know what was going on. And probably the RR cops.

I wonder why now, but then I liked to save copies of the train orders. Our operator friend would make me extra copies, and I ended up with a whole box full. Years later they all went to a Navy buddy who was also a RR fan and for some similar unfathomable reason, wanted them.

For a time our friend got bumped to Mission Tower, which was at the south end of Taylor yard, and it was orders of magnitude a larger setup. Taylor was a hump yard then as well as a major servicing yard and shops, and Mission tower was a choke point for just about anything that moved on the SP in Southern California. We paid him a visit or two but we couldn't really hang around since our friend was hopping up and down the 25-foot row of switch handles all night like a jackrabbit with ADHD and overdosed on caffeine. Fortunately he got a bump and went back to Burbank. After about two years of our visits to Burbank Junction, I bought a car and discovered girls.

A few years later, after I had met The Girl, I took her over to show her where I had spent some happy youthful evenings, to find the tower gone, replaced with a diminutive tin shed about the size of a double-wide porta-potty, fitted out with a tiny, two-foot wide CTC board, and occupied by a neurotic, paranoid operator who was in no mood for visitors. The authors of classic literature are right. You can’t go back again.

Operators came in two types - the nervous type, hopping around like a wet hen, unable to sit down, the sky is falling type;
or the calm, unflappable, ready to deal with anything type.
I was in Hunter Tower watching Ross Rowland try to get the operator to let him cross over the Pennsy mainline with the Freedom Train to head west on the Lehigh Valley. The operator was the second type. He knew what he could and couldn't do and wasn't about to be pushed around by an outsider, even if he did have his own special train
Top

Our friend at Burbank was a laid back type, but you couldn't lay back at Mission Tower. You had to pay attention and keep moving — the traffic was constant and you probably had to eat on the run and hold your bladder until you were done with your shift. Undoubtably a spot for those with low seniority. He was only there for a few months before he could bump back to Burbank.

I remember once at Burbank, we followed him down the tower steps to hang some orders. As we were heading back up the phone upstairs rang. Operator friend just kept sauntering up the stairs and I said, "Aren't you going to answer the phone." "Nah," he said. "If it's important, they'll call back." I've remembered that to this day and, unlike my lovely wife who will risk death to answer a phone, I just let 'em ring until or if I get there.
Greg Lewis, Prop.
Eyeball Engineering — Home of the dull toolbit.
Our motto: "That looks about right."
Celebrating 30 years of turning perfectly good metal into bits of useless scrap.
Top

While in OO, I have a mechanical interlocking on Long Marton: 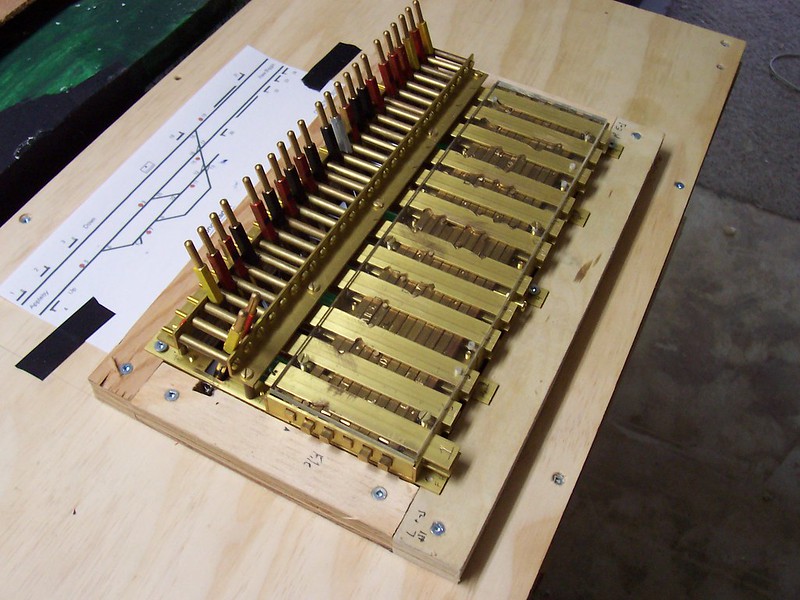 There is a video of how it operates on there too, the whole layout is setup around the interlocking. If I want to drive a loco, I have the 4 coal fired ones to drive

In 2009 I visited the Culp's Deep Run Central Railway during the Spring Meet with two friends. This private track in the woods of eastern Pennsylvania had many super scale features but one, in particular, had a surprise. An interlocking tower stood beside the tracks at one end of the yard just past the roundhouse. It was built by Dan Culp and showcased his handiwork with its scratch built wood frame and clapboards, copper rain gutters and glass windows.

Then I was told to walk around to the back side where there was a steep set of stairs to get down the retaining wall. Huh? A full-size door allowed one person to enter the scale building and look out through the 2nd-floor windows…what a strange but delightful "Alice In Wonderland" moment that was!

Unfortunately, the forum software is not allowing me to attach any images… on again, off again problem.
Best regards,
Jim Leggett

For the general edification of the group here are a couple of shots of an interlocking frame seen at the Chasewater Railway Museum in central England. The horizontal bars at the bottom comprise the interlocking mechanism.