A site dedicated to enthusiasts of all skill levels and disciplines of the metalworking hobby.
https://www.chaski.org/homemachinist/

by mklotz
I'm not a railroad afficionado (though I have built some live steam stationary engines) but I saw this photo on another forum and thought you folks might enjoy seeing it... 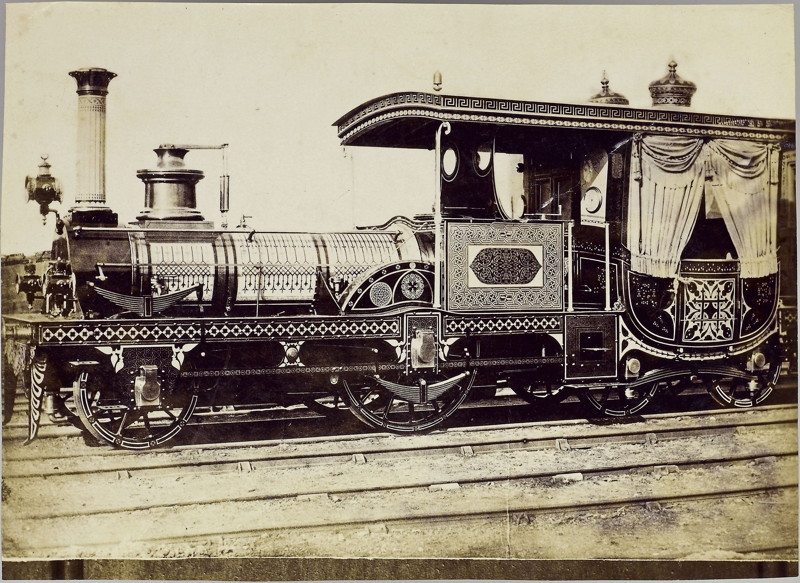 Supposedly, it's an 1859 steam locomotive of the Viceroy of Egypt. That's all I know about it. I've seen a number of decorated railroad cars but I've never seen a decorated locomotive before. Is that a cabin behind the loco where the potentate rode? If so, how was wood/coal from the tender delivered to the loco?

by DianneB
Beautiful! Looka like a cross between a locomotive and a gipsy wagon

by Glenn Brooks
From Wikipedia:

“This combined locomotive and carriage was built in 1862 for the Viceroy of Egypt, Said Pasha, for his private use.

The inside of the carriage was luxuriously upholstered in silk. The decorations were in black, white and gold, designed by Digby Wyatt, specialist in Arabic design. The dome, safety valve covers, handrail fittings, lamps etc. were all gilded. There was a communicating door between the carriage and the locomotive's footplate, so that His Highness could step out and drive himself when he felt disposed, the handles being made of silver.

The Egyptian connections to Robert Stephenson were very considerable and a wealth of consequential artefacts are in Cairo Railway Museum. This includes what could well be the single most extravagant piece built by the Robert Stephenson Works. This is works number 1295 of 1862 whose artistic design was by Matthew Digby Wyatt. This 2-2-4T for the Egyptian Railways survives with all its fantastical marquetry in the Egyptian Railway Museum at Cairo. It is called the Khedive's Train."

If memory serves, Lawrence in Arabia wrote about Viceroy Said and then his son and successor, Ishmael Pasha’s - Ishmael the Magnificent -history of proclivity for spending English money on rather extravagant entitlements, during their reign as Khedive (governor of Egypt and Soudan) from 1854-1879. While extravagance continues to be rather an Art in the wealthier parts of the Middle East, these guy’s apparently wrote the book. If I remember reading this correctly, the Pasha also outfitted his royal Guard, consisting of several hundred bodyguards, with a similar level of finery and guild. Must have been quite a sight to see his train crew and accompanying guards all outfitted in brocade and silk, with the Pasha himself firing the loco on the miles of track leading into and around Cairo.

One interesting outcome of this expense, said Pasha and his grandfather who preceeded him, Muhammad Ali Pasha, Incurred so much English debt developing British interests in Egypt, that the English government fought the Nile River War against the Mahdi in 1895mon their behalf, and eventually seized the Suez Canal from the French - establishing control over the entirety of Sudan and Egypt (and the Nile River basin) to recover their costs of foreign aid lending to three generations of Pasha’s Ottoman Egyptian government. Thus the locomotive and its larger khedive railway system was a small part of the English justification for the administering the British Mandate over the region through the end of WW2.

Could you please give me the Wikipedia URL so I can pass that information along to the folks at HMT where I saw this picture?

Here are a couple of references. Not sure I have found the exact Wikipedia url you requested. However, There are several that relate. Each has a bit more information...

Also, Scott Anderson’s book about T. E. Lawrence in Arabia has some very interesting background. Alas I left it behind in Abu Dhabi last time I was there, but I seem to recall some interesting stories about the Khedive Railway... here’s a link to the book.
https://www.amazon.com/Lawrence-Arabia- ... 7891&psc=1