I've posted this elsewhere, but thought it would be good content for the forums here too. The cross feed handwheel and graduated collar on my Rivett were borderline absurd. The collar was 1/2" in diameter, and even with only 50 marks graduated around it, they were very close together. The collar was zeroable, but had a set screw in it that required a screwdriver to tighten and loosen - not exactly convenient! Using a larger knurled thumbscrew would have obscured many of the markings. To top that off, the hand crank itself was so huge that it often interfered with the compound slide. The design was improved upon in later machines, but that didn't help me much.

I had successfully made a real nice zero-able handwheel for my old dividing head some time ago, so I was eager to do the same for the lathe. Making a larger diameter collar meant I needed a larger diameter portion on the feed screw housing, for the witness mark to match up. The feed screw housing, with the witness mark scribed on it, was slighly tapered (for aesthetic purposes, presumably) and so making a larger diameter fitting for the end of it would have been tricky business. And I did not want to modify any of the original parts in any way. To further complicate things, the feedscrew housing doubled as a retaining plate for the power cross feed gear, meaning that the plate portion had to be very carefully made. The plate is meant to be a perfect snug fit recessed within the cross slide, with a bearing hole for the power cross feed gear pivot, and with four screw holes in locations close enough so that the countersunk heads didn't look sloppily off center. And of course, the feed screw itself has to pass through unimpeded.

Making the tube portion of the housing, the retaining plate, and the enlarged witness housing as separate pieces seemed like the way to go (the original is all made from a single piece). I elected to start with the retaining/mounting plate.

My first attempt involved making a set of larger points for my miniature trammel to transfer the hole locations, much in the same way gear trains were traditionally laid out onto watch plates. My own impatience, and lack of rigidity in the trammel arrangement, worked against me and that attempt failed.

I changed tactics and made a small transfer punch (made from drill rod, and then hardened) to fit the smallest diameter holes in the original plate (the screw holes). I then made a bushing to fit the punch and the power feed gear pivot hole, and another bushing to fit the punch and the bore through the feed screw housing tube. That gave me the ability to more accurately transfer the hole locations onto a fresh piece of A2 plate.

Here is the punch and the bushings I made: 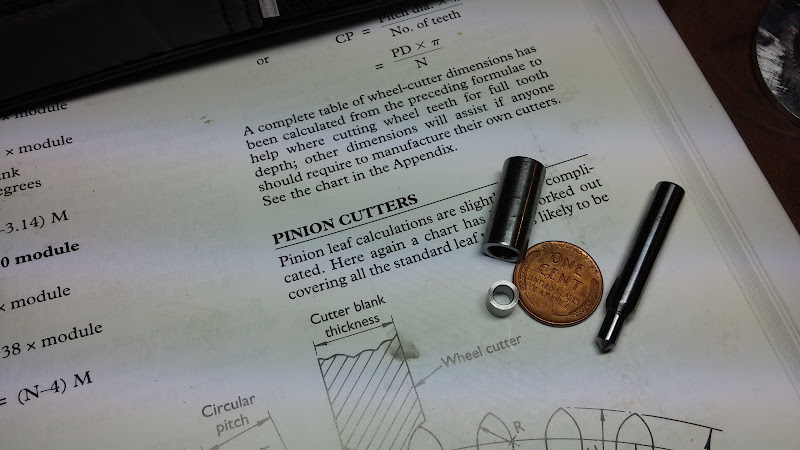 And the hole locations transferred, with the rough boundaries of the plate scribed out to use as a guide for sawing and rough milling: 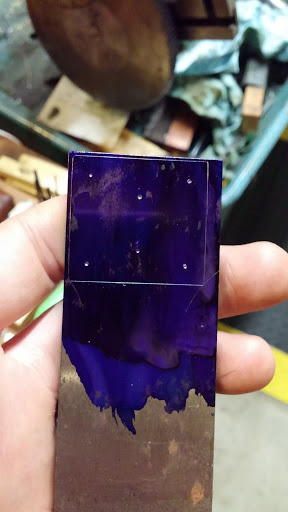 I then fly cut what would be the rear (or inner) surface (I'm loving my shop made fly cutter, even if I did accidentally make it left-handed!): 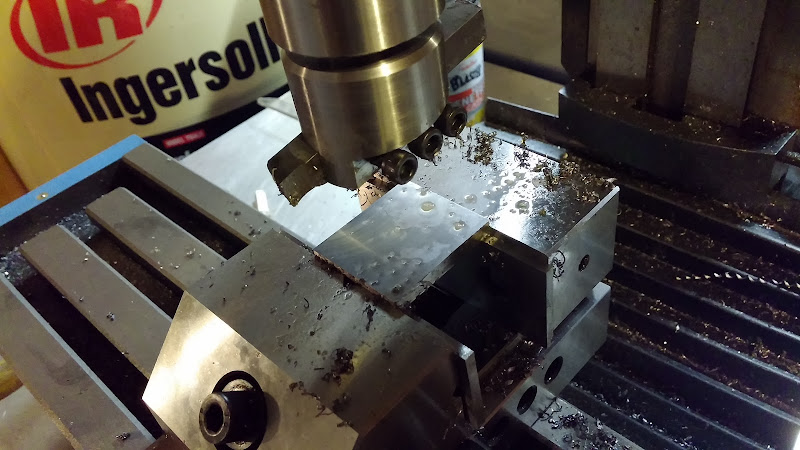 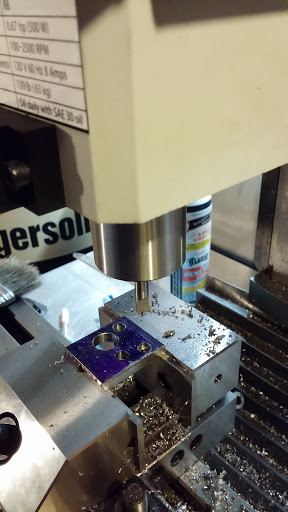 And all the holes completed: 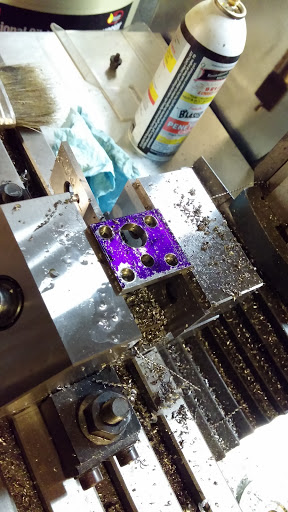 The outer dimensions were then milled close to size, and here's how the part was looking at this point: 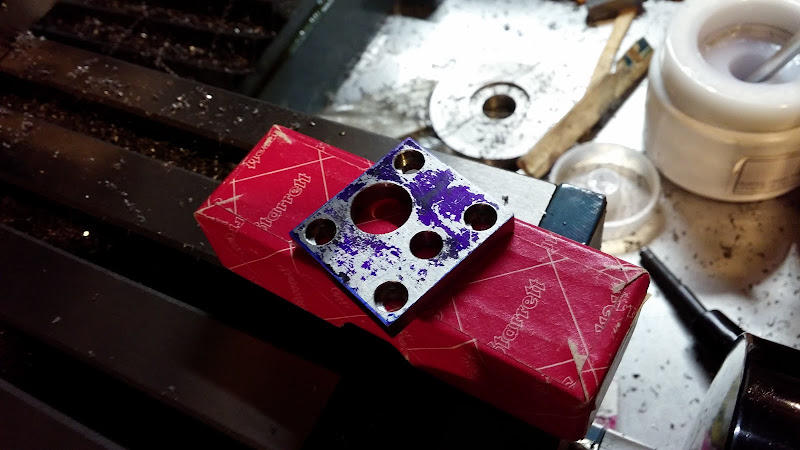 The final outer dimensions were then obtained by draw filing and test fitting until a good fit was achieved: 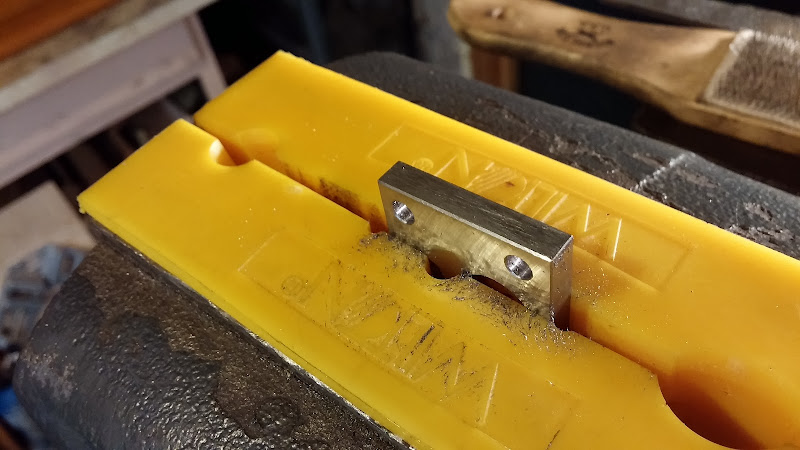 Once it fit properly, the front surface of the plate was fly cut. I didn't get a picture of turning the feedscrew tube, but nothing groundbreaking there... just drilled out to pass the feed screw, and a shoulder turned on one end to 0.501" to press into the plate. I used some junk mild steel from the hardware store for this. Here is the tube, and the completed plate: 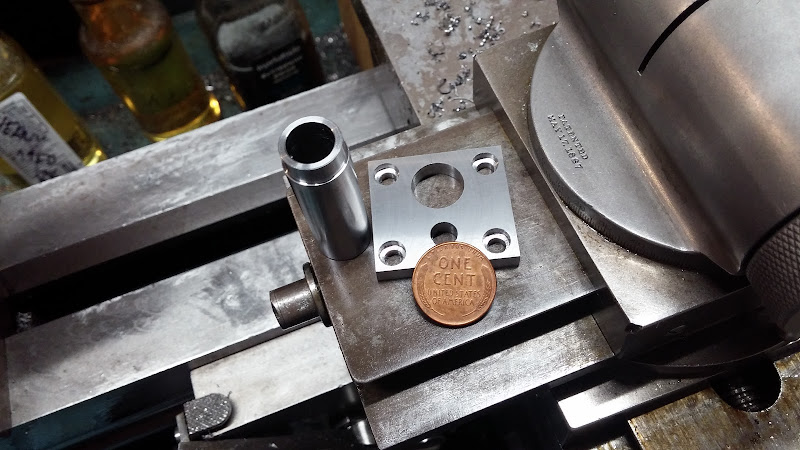 Here they are, fit to the cross slide. In this pic, I realized that the very bottom of the plate needed a bit taken off to avoid touching the top of the "shoe" (the saddle has this shoe that allows the entire cross slide assembly to be quickly slid off from the front, by releasing a lever on the side): 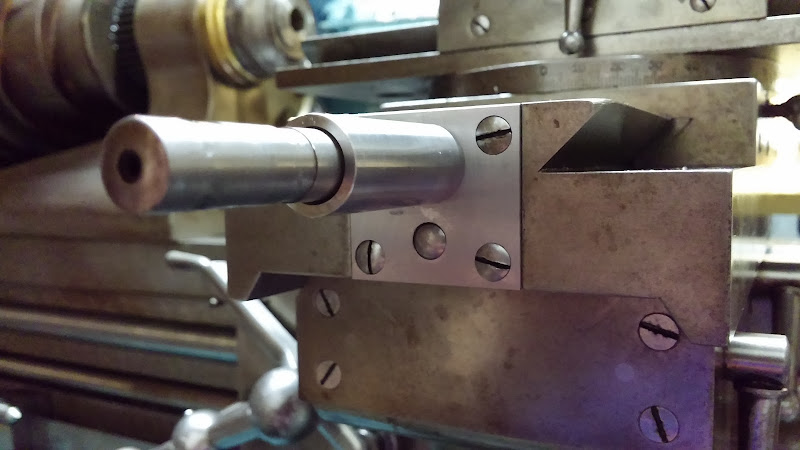 Here is where I have to apologize for not taking more pics. I was doing this at a time where my buddy's car was disassembled in my garage, and my own car was disassembled in my neighbors garage, so I was really crunched for time. I should have just snapped a few quick ones, but there you have it. I started with a couple of chunks of round Aluminum (a bit over 3" in diameter, as I recall) that were drops from some shop. Similar to how I made my other handwheel, I carved through the face of the first piece of stock, then parted it off to obtain a ring. The remaining piece was then close to the correct shape for the witness housing, and the ring would become the zeroable graduated collar. The second piece of stock would become the handwheel itself, obviously with a shoulder turned into it to accept the zeroable collar. I got a bit enthusiastic with the fit between the handwheel and the collar, and managed to get them trial-fit together... and then they were siezed up tight. I boogered up the knurling on the collar a bit trying to separate them. In the end, I used my razor blade trick (driving in razor blades as splitting wedges) and they separated pretty nicely... I used a paste of rotten stone and oil to lap the parts into a good fit. Here's a pic of them being trial fit to the machine (the witness housing is held in place via set screw, a press fit would have blocked access to the retaining plate screws): 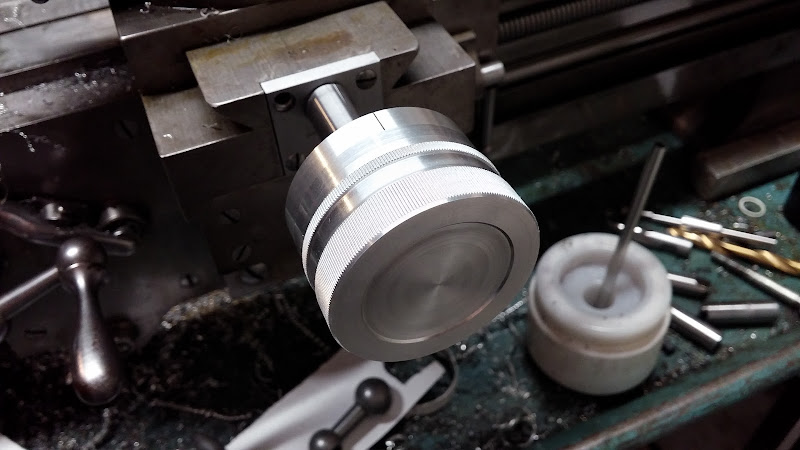 I then mounted up the collar in my old dividing head, to mark the graduations. I used a 1/8" HSS round bit that was ground to a sharp point, held in a collet in the mill spindle, to scribe the marks: 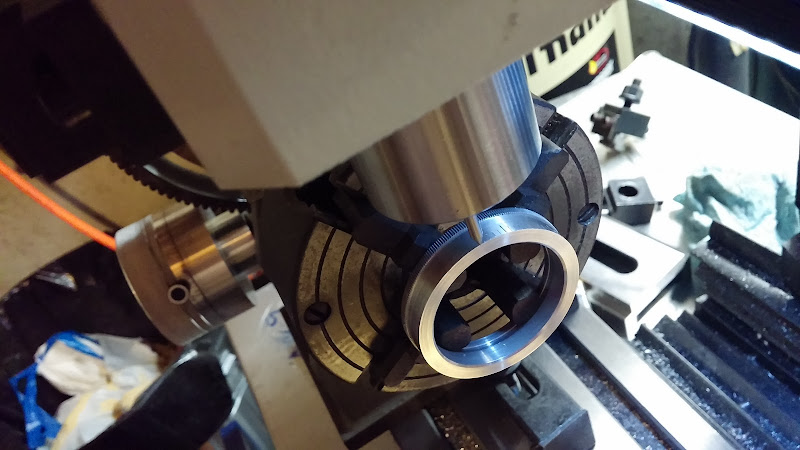 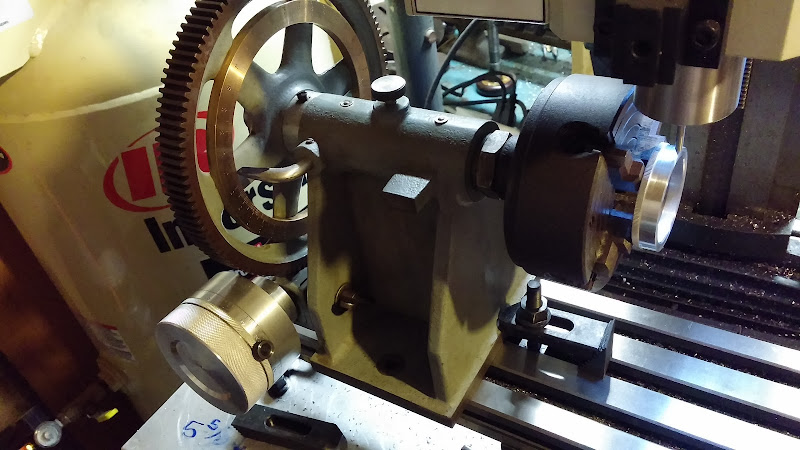 Here's where stuff gets really cool. I saw this great old Rockwell lathe earlier this year, that had beautifully made zeroable handwheel dials, and I was blown away to discover that the lock for the graduated collar was mounted on the front of the handwheel itself! I thought this was a tremendous idea and had spent some time thinking about the best mechanism to use, in terms of being easy to make and effective. I settled on a design that would use a point on the end of the locking screw (which again, goes in through the front of the handwheel) to push upward against a ball bearing mounted in a bore underneath the collar. On with the show, here is the pointed locking screw being made (I used a threading die on this screw, and immediately was disappointed in the quality of the threads, but I went ahead and used it anyway): 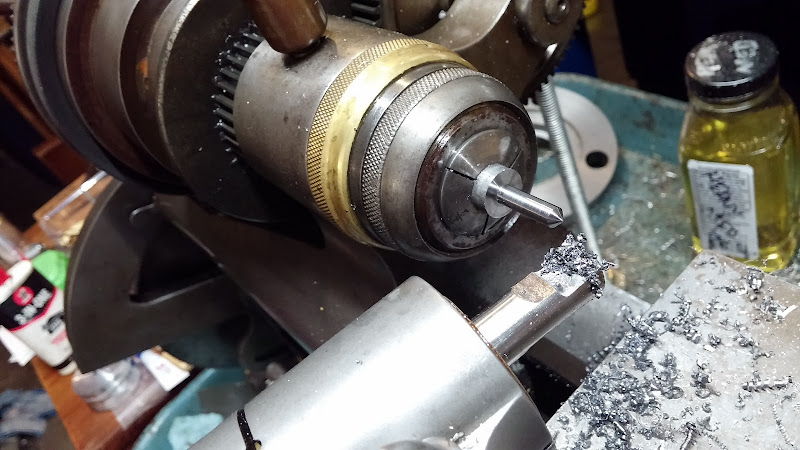 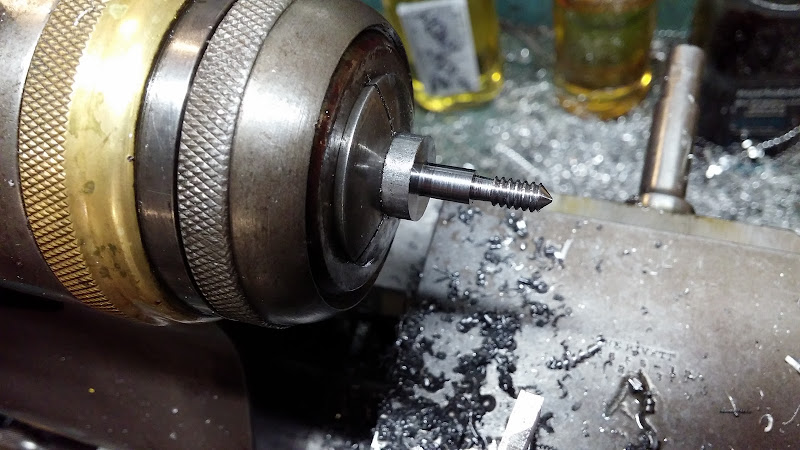 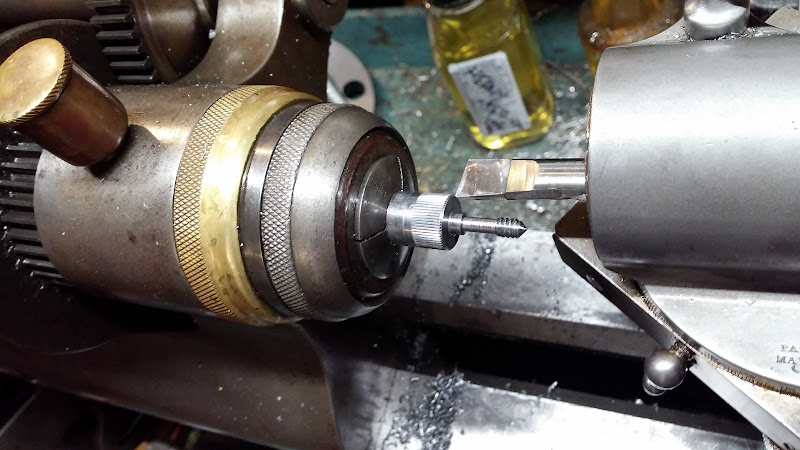 I then had to drill a bore axially into the shoulder, under where the collar mounts, to fit a 1/4" ball bearing. On the side directly opposite, I did the same but drilled deeper and placed a spring in the hole under the bearing. I had already turned a groove inside the collar for this, so that the spring loaded bearing acts like a detent to keep the collar from slipping out of place. Lastly, I drilled and tapped a hole through the front of the handwheel to intersect with the ball bearing bore at the right spot. Some simple math got me close enough that I didn't have to alter the screw at all. Here is the locking function being tested... works like a dream! 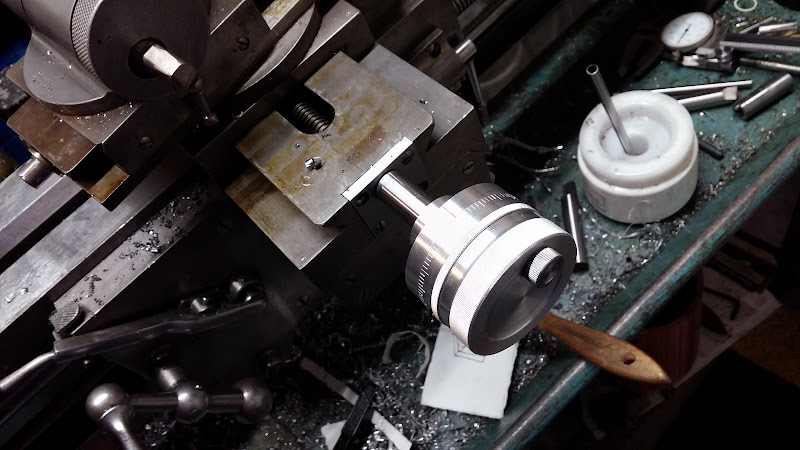 Now I needed a handle protruding from the handwheel, and decided to go with brass. I drilled and tapped a hole in the front of the handwheel, opposite the locking screw, and single pointed the threads to be a good, tight fit. The shape of the handle was obtained by using various compound slide angles, then forming the transitions with a file. Some polishing up, and it was good to go: 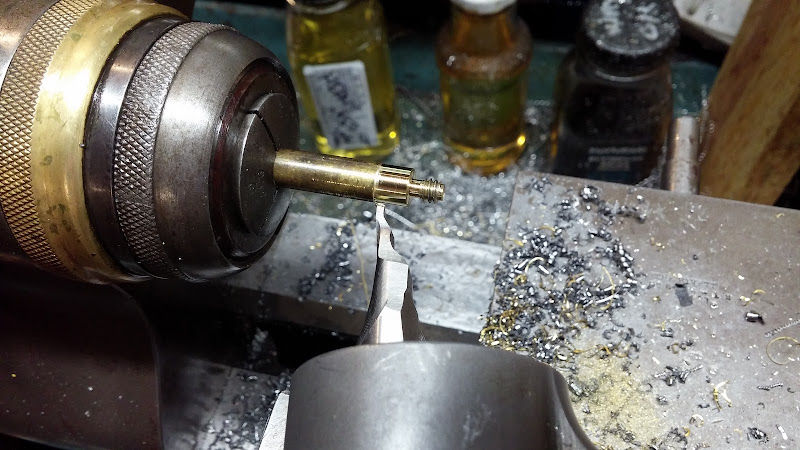 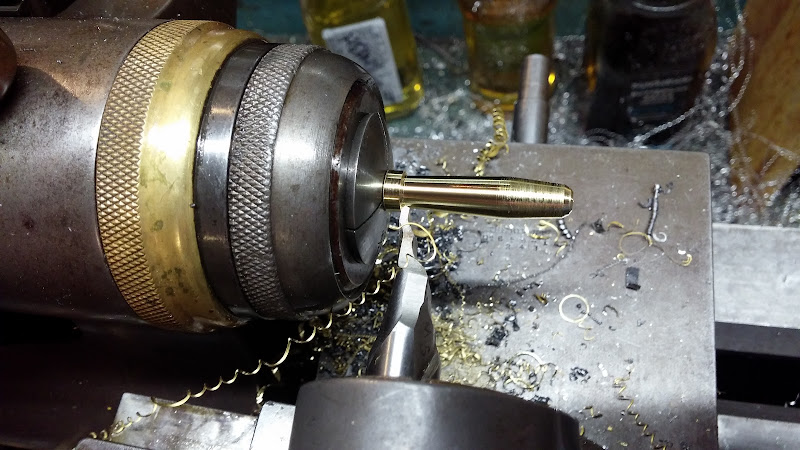 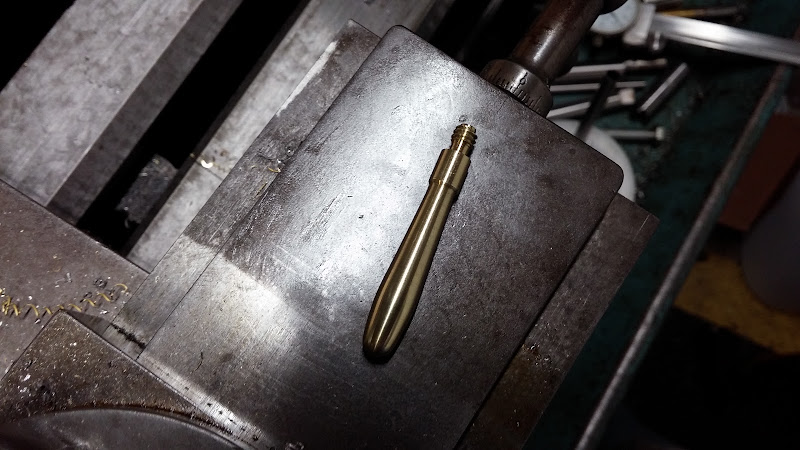 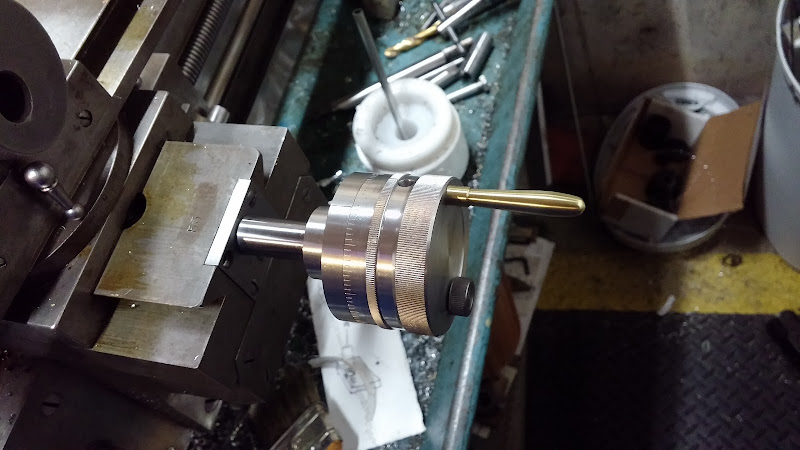 Looking pretty good, I just needed some numbers stamped onto the collar. I used a set of 1/16" tall stamps, and free-handed them. Still haven't learned my lesson and made up a stamping jig, haha. 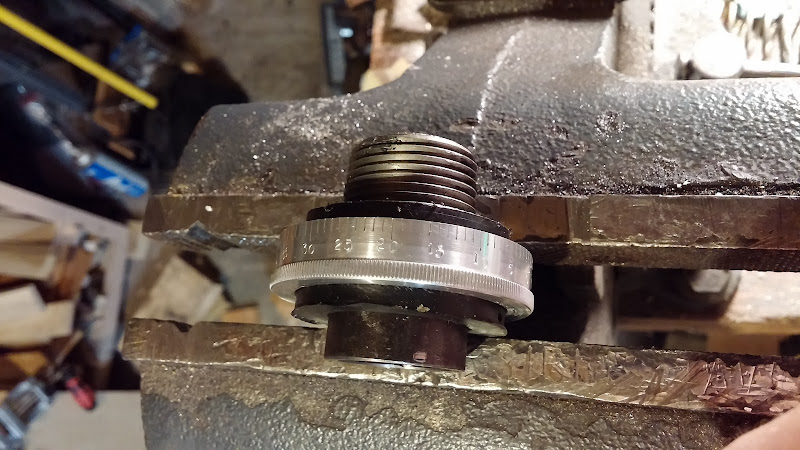 Here are all the completed parts I made gathered together (I didn't make the set screws, ball bearings, or the spring): 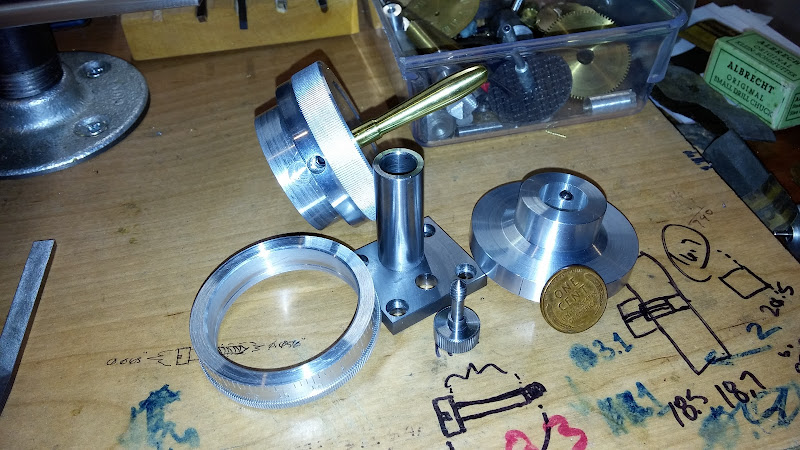 And a shot after final re-assembly: 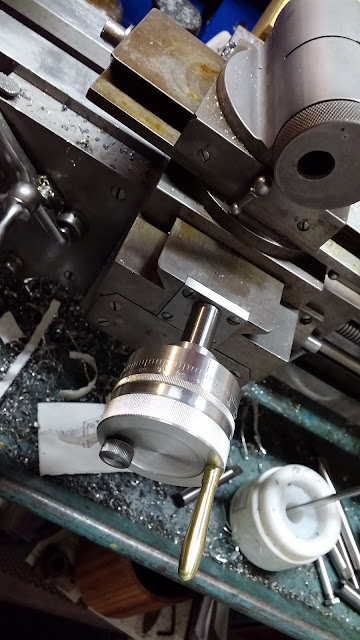 It's fantastic to use, and I can't get over how effective the locking mechanism is. The gentlest turn of the locking screw is plenty to secure the collar, and it moves smooth as silk when released. I now have proper 0.001" graduations with respectable distance between the marks. Best of all, I can fully use the handwheel even when the compound is swung out directly over it.
http://joyofprecision.tumblr.com/
Top

Very nice work. (you knew that). Several things I have owned were poorly marked, with similar limits. This is a good approach and eliminates much frustration with aging eyes, pure applied common sense.
Big Dave, former Millwright, Electrician, Environmental conditioning, and back yard Fixxit guy. Now retired, persuing boats, trains, and broken relics.
We have enough youth, how about a fountain of Smart. My computer beat me at chess, but not kickboxing
It is not getting caught in the rain, its learning to dance in it. People saying good morning, should have to prove it.
Top

That is very nice work and a very nice writeup. Thanks for taking the time to post it!
Top
Post Reply
4 posts • Page 1 of 1