Wacking the Morse taper out of the spindle

Wacking the Morse taper out of the spindle

How to take the Morse taper out without Brinneling the bearing?

My late has M3 spindle. I have MT3 collets but after pulling the drawbar on an on size part it takes a hammer blow that seem too harsh on the conical roller bearing.

How hard is too hard a blow?

Should the taper be oiled?

Should I concoct some contraption to push out the draw bar from the spindle rear? Something like a threaded ring.
Mauro Gaetano
in Austin TX
Top

On the Bridgeport M heads that use MT2 and BS7 (which are self-locking tapers), the drawbar doesn't just release the collet, as it does on the J head, it actually pushes the collet out.

The drawbar has a nut on it that is captive to the drawbar and threads onto the end of the spindle. When you loosen the collet, it pushes the collet out, with the force being entirely within the spindle and not on the bearings.

In this drawing, B is the nut that holds the drawbar onto the spindle and A is the nut you turn to tighten / loosen the collet. 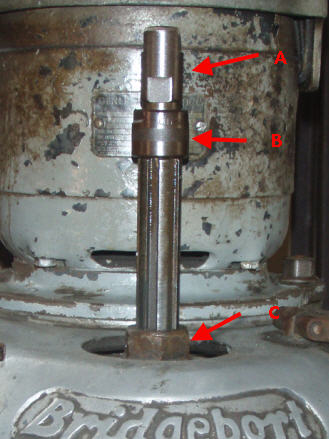 If you can fix something to the outboard end of your spindle, you could do something like that.

I think your concern is more than justified Mauro. I once read on a bearing website some years ago and I wish I could remember which one it was, but with high precision bearings brinneling can apparently get started with as little as 4 ft. lbs of shock loading. No dimensions for bearing size were mentioned, but my guess is that surprisingly low number would be for fairly small ball bearings. I've craned in some very large roller bearings for outside contractors and mine site millwrights a few times and one thing I've always noticed is just how gently each bearing is always handled. And anything like a hammer is never ever used around them either. My logic for our equipment is any shock load large enough to effectively remove any MT shank has to be be detrimental to the spindle bearings without some type of ejection system.

At one time a lot of English and American built milling machine tool spindles had Morse Tapers. And a lot of those machine were equipped with sleeve type bearings which take that shock loading much better. And as Steve showed the better machines always came with a built in factory ejector. Today other than for some of the smaller & cheaper off shore mills I can't think of any of the more expensive ball and roller bearing machines that isn't either R8 or 30,40,50 taper, and it's been like that for a long long time. That move away from self holding MT and B&S spindle tapers on mills has to be for some very good reasons. Drill presses, lathe head stocks and tail stocks are still almost all MT on the smaller machines mostly due to the MT shank drills that are available, and the tooling availablity for the tail stocks. I've owned both a MT 3 and R8 mill, and I'd guess both tapers probably hold about equally well to maybe a bit better for the MT 3. There's obviously no comparison though when getting them to release by using a hammer on the draw bar ends. MT collets and any other MT tooling shanks hold by friction and the wedging action between the two tapers. Oiling the taper might get them to release a bit better, but they'll also spin in there tapers a whole lot easier and that's certainly something you don't want. If that happens it starts getting real expensive real fast.
Top

Something to ponder.
Most folks know that the Monarch EE was one of the finest toolroom lathes to have been marketed. What they may or may not know is that a steel knock-out bar was provided with the machine, intended for use in knocking out the headstock center. Brackets on the front of the machine were provided to accommodate the bar when it was not in use.

My mill has R8 spindle and a minimal wack gets the collet released, no problem.

The lathe has the MT3 spindle. I feel I am closing the barn door after the livestock escaped but I designed a simple system to push out the collet by means of a nut. Like the Bridgeport it does not place any load on the bearings it simple places the spindle under tension.

Which bring me to the next question.

These kind of project are usually sourced from the junk/scrap box. I have the perfect nut from the head of a 1 1/8 bolt that will be blind threaded 1.25". It is SS and the head has a simple 304 stamp.

If and is practically guarantee I will manage to work harden the piece, can it be annealed with heat?

To tell the truth, not knowing any better, I have used the brute force ejection about a dozen times in 10 years, yet my bearing feel smooth and tight. I have recently started to use the collets more often and decided that, if is not too late, is time to park the hammer.

By the way, being extremely right handed, is very hard to hit the draw bar with authority. That may feel like is a bigger blow that it actually is.
Mauro Gaetano
in Austin TX
Top

Oiling an MT taper won't make it release any more easily unless you reduce the drawbar force. What it does do is increase the compression exerted on the tool or part held in the collet by allowing the collet to pull in very slightly farther.

I've never seen a drawn-in MT taper rotate in the socket. Even if it did start to rotate it would only tighten the drawbar.
Top

Yes, but I suspect that's not much of a concern. It will just become a better bearing surface, and won't gall as easily.

There's a critical heat range with non-magnetic stainless in which it has a tendency for harmful precipitation (between 800° & 1,500° F). Likely not much for you to worry about, though. To be safe, I'd probably water quench the piece after heating if I was going to attempt to anneal.

I have been wacking the MT5/5C adapter from my lathe since that is the only way I can remove it. The bearings in my lathe are bronze, so maybe wacking won't damage them like it would a ball bearing. Do you think that is a true statement?
Mr.Ron from South Mississippi
Top

It is true. The big ole bronze bearings in milling machines had Brown & Sharpe # 9, 10 tapered spindles thru sizes out side my experience. The arbors were knocked out. These machines ran lower speed and there was always a thrust bearing and means to adjust it. They were solid.
I have seen lathes with different thrust bearings and i don't get around much. Pounding from the back shouldn't disturb the nose thrust bearing but over the years or update, may have been a bearing ring placed at the back. I remember removing a spindle and once partial out, Seeing loose balls captured by bronze rings. I wouldn't want to hammer on that.
Top

If such a low force blow substantially damaged spindle bearings, there would be a lot of milling machines with R8 spindles with bad bearings. Even R8, which is not a self-locking taper doesn't generally release without a sharp rap from a hammer. I would think that the type of bearings would play a part in any risk anyway. A roller which has a wide contact area should be far less susceptible to damage than any kind of ball bearing where the contact area is a single point.

When I first got my lathe, the first time I had to remove the 5C adapter from the spindle I drove it out with a wood dowel. Like you, I was concerned about possible damage to the spindle bearings. Since then I have used a bearing splitter between the 5C adapter and the lathe spindle. Using this method the adapter comes out easily and doesn't put any undue stress on the bearings. I don't know if this method will work on your lathe or not, but it's some food for thought.

Ted
Some people raise the IQ of the room when they enter.........others when they leave.
Top

My late does not have a collet adapter, there is no shoulder to allow for a splitter type tool to work. I had since build a pusher cap-nut that treads on the left side of the spindle and pushes the draw bar nut that has been loosened a couples of turns. All force is placing the spindle in tension but no stress on the bearing. It take quite a wrenching though.
Mauro Gaetano
in Austin TX
Top
Post Reply
16 posts